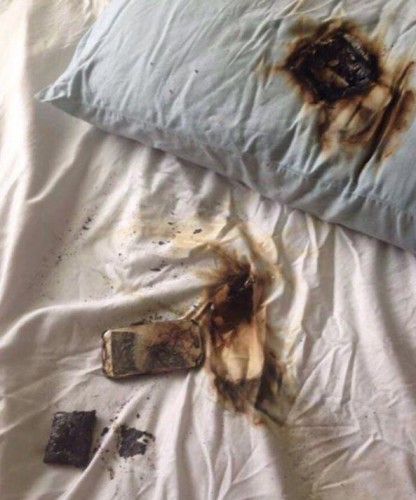 But for the speedy reaction of the Delta State Fire Service, on Monday, Jan. 13, the Charismatic Renewal Ministries Incorporated would have been completely razed. Before the intervention, however, the fire had gutted the administrative section of the church located in Asaba, Delta State.

Preliminary investigations into the cause of the fire revealed that a phone was left to charge in a room inside the church complex and placed on a mattress. The phone caught fire and its spread was supposedly aided by the mattress.

These days, it is frequently heard of laptops and phones catching fire. It has even become a major talking point with tech giants like Apple and Samsung being accused of producing ‘faulty’ devices.

The outcry got to a point that these companies had to withdraw some of these ‘faulty’ devices. For example, the production of the Galaxy Note 7 smartphone was halted back in August 2019 over safety concerns.  Similarly, the Apple Macbook was withdrawn from the market, mid-2019, over these concerns.

While these companies may not be totally blameless for these devices catching fire, the consumers also have their fair share of responsibility. This is so because they sometimes neglect the safety precautions in handling a phone gadget.

It is important to start with an unfamiliar term called “thermal runaway”. This refers to a process in which a Lithium-ion battery catches fire. These batteries are composed of Li-ion cells. Therefore, thermal runway occurs when these cells hit a boiling point and start to emit a ton of heat.

Thus, firefighters from Newton, New Hampshire in the US point out that when the heat generated cannot fritter away, the device charger will become hotter and this will result in the most possible scenario – the beddings catching fire!

And based on research carried out by the fire department, about 53% of children or teenagers charge their phones or tablets on their beds or under their pillows. This led to a call for parents to constantly monitor where phone gadgets are being charged in their houses.

In summary, the United States Consumer Product Safety Commission, an independent agency of the United States government, explained that these Lithium-ion batteries in wireless devices possess tons of energy and need to be treated with care. For example, they warn that once a battery is noticed to be swollen, it should be discarded immediately. According to the commission, any potential fire outbreak from such carelessness could prove fatal.

Nonetheless, it is important to always remember not to place a charging phone on a bed, mattress, foam, pillow or any bedding for that matter. While it might seem like the most convenient thing to do, it is not safe in any way.

I’m Seeking Public Office To Bring Succour To My People –...

Why politicians may not commit to road safety, by Amaechi

8 Steps To a Strong Safety Culture

3 men in court for hitting Ikeja Electric staff with block